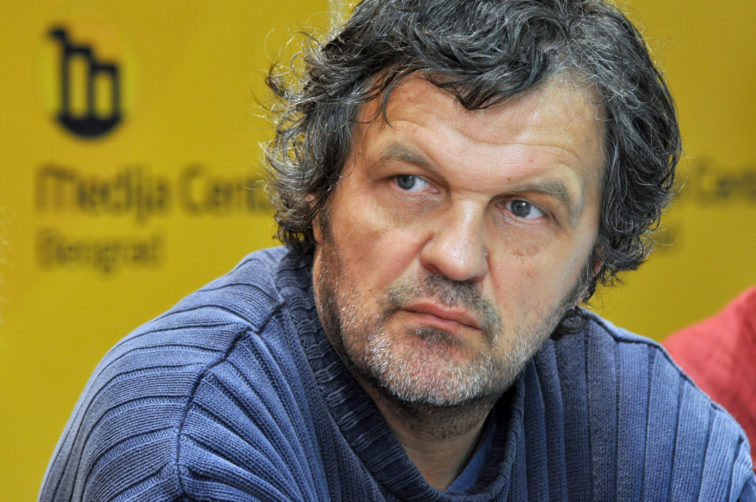 Serbian director Emir Kusturica is the chair of the jury of the 43rd Cairo International Film Festival running from November 26th to December 5th. The jury will decide the winners among the 13 films entered in the International Competition, which includes 8 European productions or co-productions. In all 98 films from 63 countries will be screened during the Festival, 27 of them world premieres.

Emir Kusturica has won major awards at the most prestigious international festivals. Born in Sarajevo in 1954, he studied film-making at the Prague Film School (FAMU). His first feature “Do you remember Dolly Bell?” won Best First Film at the 1981 Venice Film Festival. Kusturica is one of the rare film-makers to have won the Palme d’Or at Cannes twice. In 1985 he won it for “When Father Was Away on Business” (in addition to the FIPRESCI prize and an Oscar nomination for Best Foreign Language Film). Ten years later “Underground”, a film about bitter life in the Balkans, won him a second Palme d’Or. In between, in 1989, he won Cannes’ Best Director Award with “Time of the Gypsies” about the life of a gypsy family in Yugoslavia. In 1993 his first film in English, “Arizona Dream”, won the Silver Bear at the Berlin Film Festival. The same year he was a member of the jury at Cannes and jury chair in 2005.

There will also be the “Youssef Cherif Rizkallah”  Audience Award worth approximately €13,275.

Feature films are also competing in the “Arab Cinema Horizons” category. As well as being in the International competition, these titles are eligible for the Best Arab Film Award, worth nearly €9,000. This year 3 films from North Africa and its eastern neighbours are making their world premieres: “Abusaddam” by Nadine Khan (Egypt), “Daughters of Abdul-Rahman” by Zaid Abu Hamdan (Jordan), and “Tomorrow” by Dhafer L’Abidine (Tunisia). 22 short films are also in competition for the “Youssef Chahine” Award and the Special Jury Award.

Running parallel to the festival, the 4th Cairo Industry Days will take place from December 1st to the 5th. Discussions, workshops and master classes are co-organised by Netflix and the Middle East Media Initiative (MEMI). The second “Because She Created”, one of Netflix’ most important activities, highlights the role of women in the Arab entertainment industry.

CIFF’s director, the Egyptian producer Mohamed Hefzy, hopes the festival will be an environment in which Egyptian audiences can come together with the region’s film professionals to view the best international films. Founded in 1976, the festival is the only “category A” film event in the Arab world. This prestigious label is awarded by the Paris-based Fédération internationale des associations de producteurs de films, the regulator and classifier of all the major international film festivals. There are 15 category “1” or “A” festivals, including Cannes, the Berlinale and the Venice Film Festival.

For more information on the audiovisual news in Egypt, please click here.

Permanent link to this article: https://mediterranee-audiovisuelle.com/emir-kusturica/?lang=en