The films chosen in the Mediterranean Multimedia category for the 21st PriMed are: 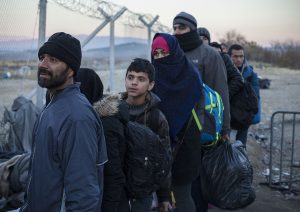 “BorderBlob” was born of a thought: borders produce spectacle. And in the very nature of that spectacle, the theme treated stimulates the imagination. Real borders are covered by a veil and a new reality emerges.
Begun in October 2015 and still in progress, “BorderBlob” is a collage of true stories: Lampedusa, Lesbos, Calais, the Mediterranean Sea, Ceuta, Tangier, Melilla, Idomeni, Bulgaria, Tunisia, Istanbul are just some of the borders touched upon in this journey.

Andrea KUNKL was born in Milan in 1980. Currently he lives in Rome.
He studied sociology at the Università di Milano-Bicocca, followed by a Master in photography at Milan’s Nuova Accademia di Belle Arte.
He works on projects which explore borders, perception, identity, utopia. He has several exhibitions to his credit, collaborations with magazines, and he has written two books. He also teaches. 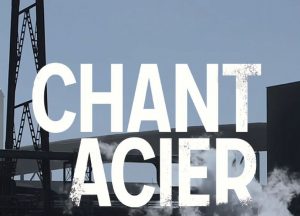 They are steel-workers and talk from inside one of the last major French steel-making sites – the factory, their factory. Connected to the sea, the steel works at Fos-sur-Mer receives the ore by sea, transforms that ore into steel which it then sends back by sea, an incessant ballet of boats.
It began with writing workshops for factory employees. Led by François Bon, they were encouraged to say what is in their heads as they work. The beauty, the risk. The inevitable and the revolt. The routine and the body. Next, filming the factory – but not our vision, using the texts they wrote, creating an interactive documentary which throws us into this violent, moving reality.
This interactive literary experience is accompanied by a digital book in the form of a primer, as well as a series of interviews with well-known thinkers, artists, who give us their perception, as a way of opening the debate on the future of the “amplifier to the world” in our societies.

Author: François BON. Having not completed his engineering studies (Arts et Métiers), he worked for several years in industry, in France and abroad, and published his first book, “Sortie d’usine” (Factory exit) published by the Editions de minuit in 1982. He then devoted himself to his literary activities, publishing in particular “Rolling Stones, une biographie” (2002) and “Daewoo” (2004). In 1993 he began on-going research in the field of writing workshops, which led him to teach creative writing at the Ecole Nationale Superieure d’Arts in Paris-Cergy. His web-site www.tierslivre.net was created in 1997, now a well-known platform for experimental web-based literature. His last published book: “Fictions du corps, L’Atelier contemporain” (2016).
Director: Emmanuel ROY. Born in 1976, he made two very personal films: “La part du feu” (a feature-length documentary made in November 2013) and “Histoires d’œufs” (medium-length documentary 2006). He likes atypical projects and fruitful collaborations, for example with Blandine Grosjean for “Nos chers paradis” (52 minutes broadcast on ARTE in November 2015). He is currently completing his second interactive documentary: “How to make a Ken Loach film” (produced for ARTE by Upian and Sixteen Films). In parallel, he runs different types of creative workshops with students, with kids from social centres, prisoners, people on reintegration programmes and from diverse backgrounds, within the Ateliers Varan in Paris and structures in the PACA region.
Interactive design: Annabel ROUX. Jack-of-all-trades, Annabel Roux has been designing and scripting interactive experiences and devices for the web and mobile web for more than 15 years, and for nearly three years has been collaborating on interactive documentary and drama projects by creators and producers from all backgrounds (social documentaries, live performances, music). She also develops her personal projects around issues related to the place of technology in our daily lives and runs interactive writing workshops with tlab.mars, a multi-disciplinary group in Marseilles. 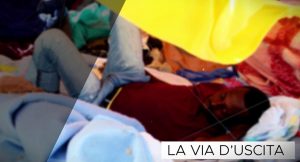 Today we are facing the most serious migratory crisis since the Second World War. Europe’s response has been to sign an agreement with Turkey, closing the Balkan route and thereby preventing refugees from reaching northern Europe.
The Schengen Treaty is wavering, barricades are going up in many European states.
The result is that today the only route open is across the Mediterranean, from Libya to Italy, and the Italian territory, with Greece, has become the only landing zone. To avoid instability in the country, Italy has to face this wave of migration and radically change its reception procedures.
The team behind Rai 3’s programme Report tried to build a project turning drama into opportunity. Costs were calculated and benefits proposed. The whole thing would be managed by the Italian state, supervised by Europe. The project was submitted to the European Commissioner and the Member States of Northern Europe – and accepted.
The Report investigation is a contribution of ideas offered to the Italian government.

Milena GABANELLI is a journalist and presenter on Italian television.
She works as a free-lance for Rai’s investigative programmes.
Until the age of 19 she lived in Desio (Brianza province), then in Bologna, where she graduated from DAMS university with a thesis on the history of cinema.
In 1982 she joined Rai and made news programmes for the regional third channel.
Report, which she directs and presents, was broadcast for the first time in 1997 on Rai 3 and presented at the time by Giovanni Minoli. Over the years, the programme has become Italy’s best known investigative programme, dealing mainly with economic issues, but also with health, justice, organized crime (Ecomafia, secret services, etc.) and the inefficiency of public services. The programme receives many complaints because of the sensitive nature of the subjects dealt with. On November 28th 2016 Gabanelli presented her latest show. 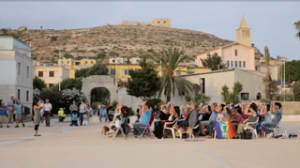 Sant’Elia is a district on the edge of Cagliari, Sardinia.
Against a back-drop of council blocks, vacant lots, building sites and the sea, women talk about the myths, the conflicts, the weariness – and the pride – of living here.
The web-documentary has six character/narrators, there are graphics, maps, photo galleries and multimedia content – the result of three years’ research and joint effort between researchers at the University of Cagliari, film-makers and a group of local women.

Silvia ARU is a geographer. After completing her PhD at Trieste University in geo-history and the geo-economics of border regions, she acquired research experience in Italy (Florence, Cagliari and Turin) and abroad (Vancouver, Rio de Janeiro). In 2016 she won the Italian Geographical Society’s Young Researcher Award. She is currently a researcher at the University of Siena.
Bruno CHIARAVALLOTI is an anthropologist and film-maker. Since 2000, he has worked with various film festivals and made documentaries. In 2008, he won an award for his documentary “Una questione privata” and in 2011 he won the Fai award at the Milan International Film Festival. In 2013, he collaborated with artist Marinella Senatore on a documentary about participatory art. In 2016 his documentary “Our War”, made with Claudio Jampaglia and Benedetta Argentieri, was shown at the 73rd Venice Film Festival.
Claudio JAMPAGLIA is a journalist, author and film producer. As a journalist, he has collaborated with various newspapers and magazines, radio and television programmes. He has published several books. Since 2010, with the Prospekt agency, he has worked as an author and producer. In 2016 his documentary “Our War”, directed with Bruno Chiaravalloti and Benedetta Argentieri, was shown at the 73rd Venice Film Festival.
Maurizio MEMOLI is Professor of Geography in the Architecture Faculty at Cagliari University. Member of the Board of Directors of the Italian Geographical Society, since 2008 he has been a member of the research department in the University of Montpellier 3 (France) known as UMR-GRED (Governance, Risk, Environment and Development). His main research interests are urban geography, the representation and production of images of the city, urban politics and movements as well as the practices and perceptions of space. He is the scientific coordinator of the multimedia project “Geo-telling”.

Permanent link to this article: https://mediterranee-audiovisuelle.com/primed-2017-mediterranean-multimedia/?lang=en